Are Your Stance and Smile Superpowers?

So I woke up to that fact, like what’s going on with me? And I employed a couple of tactics that I’ve recommended for a long time. And sometimes you forget to apply the very things you’ve recommended to other people.

One of the things I did… I smiled.

I wasn’t in the mood to smile, but did you know studies prove that just the act of smiling, the physical act of smiling ,can elevate your mood. It does something physiologically to you to just smile. I often recommend this to people if they are in customer service positions, where they’re on the phone with people who are typically negative or called with a complaint, and that’s their normal circumstance—to address that with a smile. If you’re even writing an email in which the tone and the topic is less than pleasant, the mere act of smiling as you write that email can help elevate your language and your interaction to be more positive.

So I tried that on myself today. And then, at one point, I was looking at my phone. I keep no more than 30 images and video on my camera roll at any given time. And so most of what’s there are things that just make me happy or that inspire me. I don’t keep a lot of actual work related stuff living on that camera roll. And one of the things I have is a screen capture from a text that my husband sent me one day, I was about to go into a conference call, and it was going to be a lot of things going on in that conference call. And he texted me, and he said “Power stance. You are smart and beautiful.”

“Power stance” actually goes back to the power pose that Amy Cuddy talks about in her book Presence.

And the power stance is like, wow, the victory! And just that physical body language—doing that—I do it palms up looking to heaven just for, like, 30 seconds—can change things.

And so my husband and I learned about that. And we call it the power stance, and we very frequently before we’re going into demanding situations, we’re like “Do it!”. And I always remind him palms up to receive the good, you know. It changes so much.

And I have another story related to this just body language and how it can affect your mood and your physiology. This is such a cool story. So this was written by Burt Reynolds, the actor. It was in a book, and I don’t know the derivation of the story, but I did capture a screenshot of the story, and I gotta read it to you. This is really cool.

So this is Burt Reynolds talking here…

“I was walking with Marilyn Monroe on our way to the Actors Studio. And she just had on an old football Jersey, a pair of slacks, no makeup. And we’re walking on Broadway. We’re just coming up to Child’s restaurant. And I say to her, “You know, this is amazing. Marilyn. We’ve been walking four blocks and nobody is bothering you. And she went, “Oh Want to see her?” I said, “What?” She says, “Do you want to see her?” Now, she didn’t take off any clothes. She didn’t do anything except change her posture. We took about four steps and it was damn near a riot. We needed the police to get us out of there.”

Y’all the story that Burt Reynolds shares about Marilyn Monroe! She was unrecognizable. And then she changed her posture, and they couldn’t even walk down the street anymore. That presence that, that power stance changed everything. I just think that that story is so amazing and effective!

I just wanted to share these thoughts. If you’re facing something during a busy day, a big meeting, or you’re just working on something and you start to feel a little shriveled—you kind of want to go in fetal position—I invite you put a smile on your face, even if you don’t really mean it. And power stance: arms up, palms up, ready to receive.

It does something. Give it a shot. 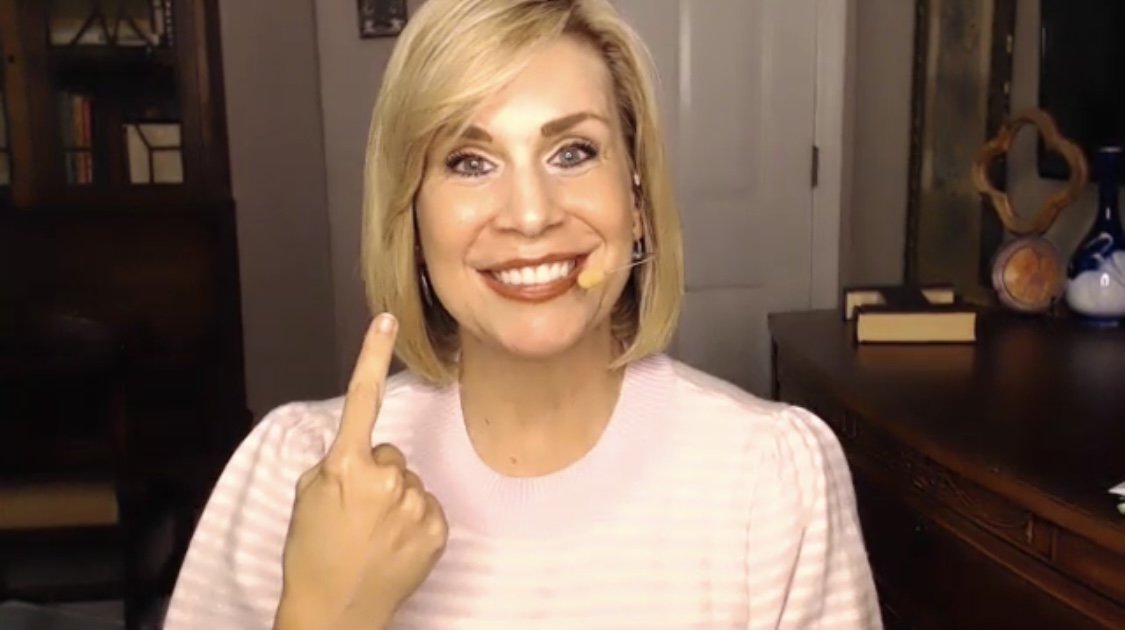 Bracing for a hard encounter? Put a smile on your face, even if you don't mean it, and do a power stance: arms up, palms up, ready to receive. TWEET THIS